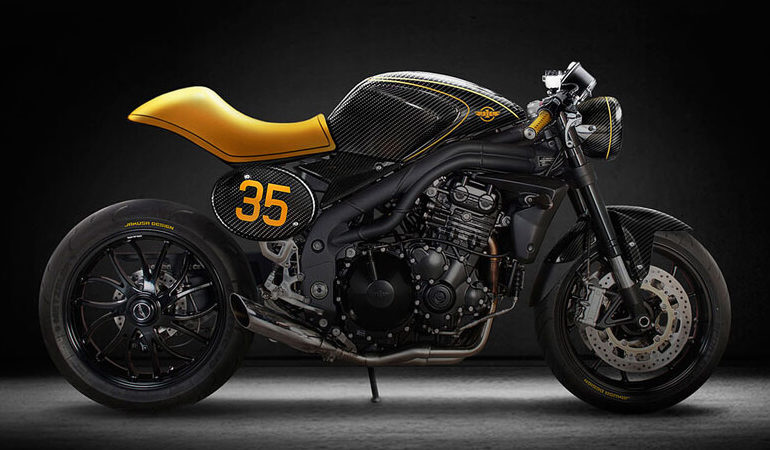 Kevin’s first request was to base the build on a Honda CX500. Karl felt that a Moto Guzzi would be a better option, but Kevin held his ground. A CX500 Sport with 30,000 miles on the clock was sourced.

Karl hauled the Honda back to the workshop and began stripping it with Kevin’s ideas in mind. But when he had it down to the bare frame, the brief went out the window.

“There are no words to describe the frame,” he says. “It’s an affront to design.” Leaving nothing but the steering column, Karl rebuilt the entire frame from scratch, with far more agreeable—and exciting—lines. The re-work also included an Öhlins-equipped mono-shock conversion at the rear. The front forks are from a Triumph Speed Triple, mounted via a set of custom, water jet-cut triple clamps.

All that remains of the original CX500 are its wheels and engine. The OHV V-twin has been spruced up with a mix of raw, polished and painted finishes, and Karl’s fitted velocity stacks in place of the airbox.

The otherwise unsightly wheels have been polished, and now somehow suit the revised CX. There’s also a double brake disc arrangement up front (borrowed from a BMW) to help the bike stop quicker.